Altuzarra For Target Launches On Net-A-Porter.Com 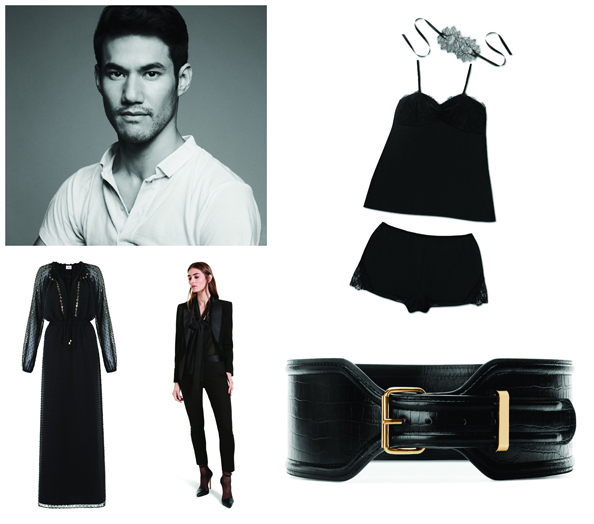 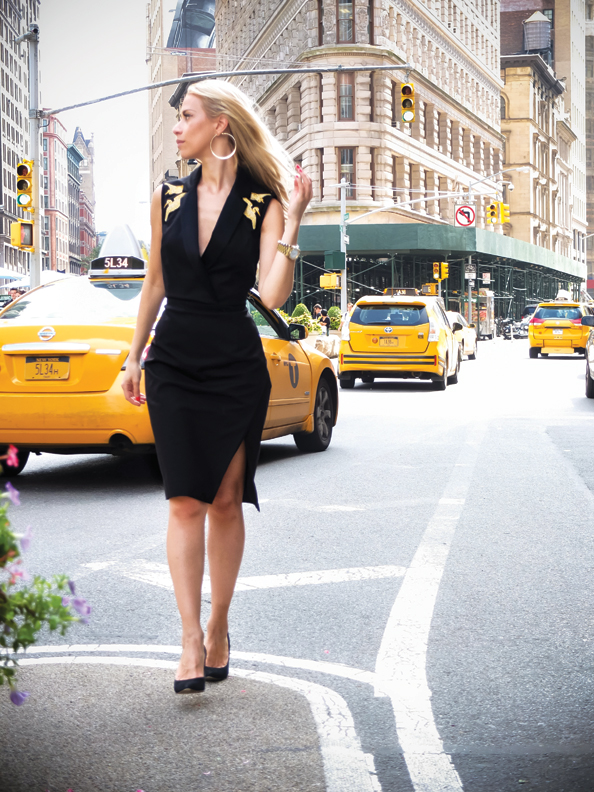 Raised in two of the most fashion-forward hubs on the planet, French-American designer Joseph Altuzarra is fluent in the language of city style. Selling globally on net-a-porter.com, his latest venture with american brand Target captures this in spades; the ideal match for today’s urban woman. Fashion Features Editor Olivia Phillips road-tested it in the perfect environment – the concrete jungle that is New York City

Fresh from having won what some consider the most important award in the industry, the Womenswear Designer of the Year at the CFDAs, you wouldn’t blame Joseph Altuzarra for being more than a little pleased with himself. Emerging triumphant against fellow heavyweight nominees Alexander Wang and Marc Jacobs (who he once interned for), winning the fashion world’s Oscar is met with a refreshing humility instead. “It was very nice to win,” he tells me in his melodic American lilt, underplaying the gravity of it by about 300 per cent. “That’s a very British answer!” his whip-smart communications director interjects, all legs, glossy hair and wearing this season’s thigh-split, band-striped pencil skirt. Aptly, she’s every inch the New York woman that Altuzarra has become the go-to brand for. “I love New York,” Joseph says, “but I grew up in Paris so it will always have part of my heart. It’s much more traditional though, whereas in New York there’s an energy and a love of the new. But it’s amazing that I’ve had the opportunity to experience both.”

It’s this dichotomy that the man, the brand and the collections – including his new venture with US high-street behemoth Target – are struck through with. Since launching his eponymous label six years ago, his creations have

captured that sought-after blend of American practicality and insouciant French flair, a direct result of his heritage. “My mum is Chinese-American and I draw a lot of inspiration from growing up in a bi-cultural household,” he explains. “I travel a lot as well – I’ve just got back from Italy – and I’ve learned that my customer does, too. She’s very global.”

Wanderlust, as it happens, was a key factor in creating the range for Target, a tightly-edited collection that net-a-porter.com will be exclusively stocking globally  when it launches on September 14. “The narrative really became about travel. The idea that this woman was going to all her favourite places and bringing back either clothing or furniture,” he explains, delving into the nomadic backstories behind the bird-embroidered tuxedo dress (inspired by Japanese lacquer), overblown orchid prints (Chinoiserie), peasant-shape blouses (Romanian dress) and snake-print separates (python boxes sourced from Indonesia). And of course, the brand’s DNA is stamped all over the collection in the form of his now-classic split skirts, razor-sharp tailoring and ultra-luxe aesthetic. “This is a truly identifiable Altuzarra collection,” Ben Matthews, Buying Director at net-a-porter.com told us. ”The vibe is completely aligned with Joseph’s main line.”

I wondered if he was concerned if his dedication to luxury would be compromised in joining forces with a fast-fashion brand. “I was initially afraid that they’d just want me to knock myself off,” he jokes, “but I really wanted to do something unique to them. In the past Target has been a lot younger but this felt more sophisticated and grown up. It was so important to me that the pieces looked expensive. Especially as there was a sense that this collection was for a woman and not a girl.”

So what was the secret to making sure his vision was realised? “I think that the designer has to be super involved  – and I was, right from the beginning,” said Joseph. ”I pushed for things like doing a digital snake print and not a screen one, which is more expensive but ends up looking far richer.” His integrity and involvement is laudable, and you can’t help but get the sense that he was pleasantly surprised by the entire process. “The budgets working with Target are so huge that you end up finding really interesting solutions because you’re able to do so many iterations,” he says. “I found it hard to understand how we were going to create a piece that was really well-made at the price point it needed to be. But the reality is that they’re making 100,000 of every dress and so the price just decreases dramatically.” He wanders over and picks up an incredible Pretty Woman-style over-the-knee boot. “The fact that these are, like, US$60 is crazy! That’s the power of scale.”

But how does he feel these mass-market and high-end partnerships effect the industry as a whole? Is it watering fashion down or simply democratising it? “What I love about them is that, in a way, you’re controlling it. I found that really interesting, especially since in the past we’ve been copied on the high street. So I hope this is the way the future is headed – that these types of retailers are going to work with designers who are going to be able to give a voice to their product.” It’s an intelligent, forward-thinking point of view, and one which leads on to my next question; where he sees fashion going next. “Ten years ago there was a stigma to showing wearable clothes on the runway but now editors are expecting to see them. Women are far more aware of fashion shows now – they’re going on style.com and shopping directly from the show. They want to feel like they’re actually wearing look one, or look five. There’s a move towards pragmatic clothing that’s still very special.”

It’s the exact balance his clothes strike, something I now have first-hand experience of. I tell him that I’ve been running around New York shooting his new collection on myself, feeling like a cross between SJP and Carine Roitfeld, glamazon former editor of French Vogue. “It’s funny you say that because Carine always is a huge influence in my collections. She has a certain decadent elegance about her.” And just like that, we’re back to his inexorable love of Parisian style. “l like the sophistication and slight twisted bourgeoisie of French taste. It’s very sexual, it’s not very PC…I like that element of it. But I also like the pragmatism of American women and that there’s a realistic, easy quality to how they dress. The meeting of the two is something I strive for. It’s a tuxedo dress but with a parka over it. That really sums up what Altuzarra’s about – the very French and very American together.” A perfect union, non? 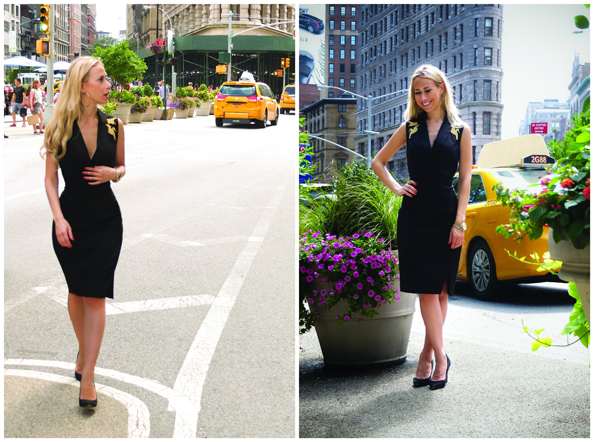 “There’s always a global influence in my designs, whether it’s something from Morocco or South-East Asia. This tuxedo dress was inspired by Japanese lacquer for example. I travel a lot but wish I could do more – I’d love to go to Tibet next; there’s a really interesting tension between the traditional and the outside world coming in. 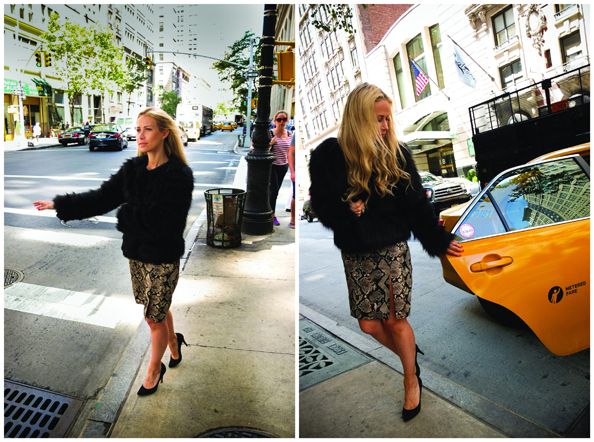 “The snake print was inspired by Indonesian python boxes that I thought were really beautiful. But there’s also a strong Carine Roitfeld influence in the collection – I love her decadent elegance and sophistication.” 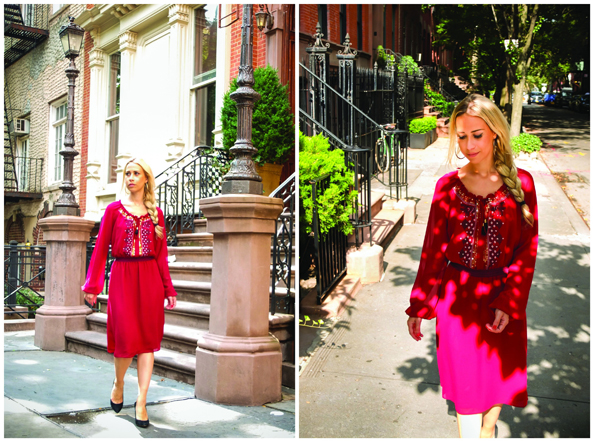 “Romanian blouse shapes are something I’ve always really loved. We were excited by the embroidery techniques we developed for them; we wanted them all to feel really important, unique and special. We found a way to make everything look rich.” 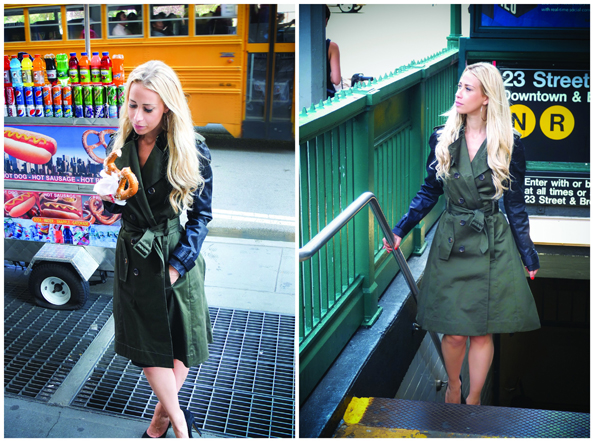 “The trench with the peplum is one of my favourite pieces from the collection. There was so much tailoring that went into it! It was so important to me to have everything well-made because I think the consumer, whether they’re buying a luxury piece or not, should be able to get a product that was designed with care and has a voice.”

The Altuzarra for Target collection is available at net-a-porter.com from September 14

Shoes and earrings Olivia’s own