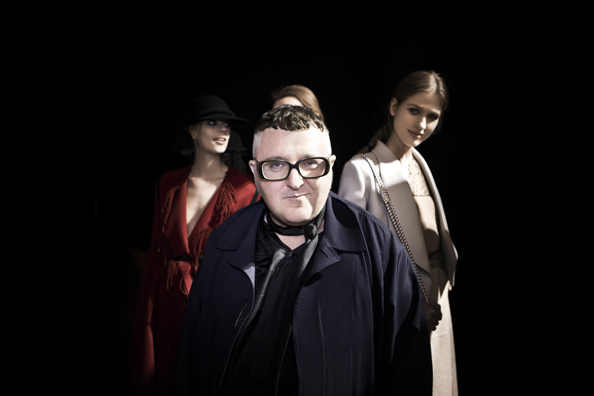 Hold the press! It is with excited butterflies in our bellies that we reveal that Alber Elbaz, the Artistic Director of Lanvin, the oldest French fashion house, will be visiting the Middle East for his very first public appearance.

Only if you have been living under a rock for nearly two decades then you may, just may, be forgiven for not knowing that is Alber Elbaz is the creative director of Lanvin, which in turn is one of the world’s most revered fashion houses. Since taking over the brand in 2001, Elbaz has turned Lanvin into one of the most covetable and respected brands in the fashion industry, thanks to his ability to combine its rich heritage with his own unique creations.

Now, you will understand our excitement when we announce Alber Elbaz is set to stun the Middle Eastern crowd by showcasing pieces from his latest Lanvin winter 2015 women’s wear collection when he visits the region in April 2015. Making his debut visit extra special, Elbaz will also reveal some creations exclusively made for the Middle East – bespoke Lanvin! We’re weak at the knees.

Born in Casablanca, Morrocco, in 1961, Elbaz pays homage to his roots and also to Jeanne Lanvin (founder and original designer of the brand, who is the subject of a current exhibition in Paris) in his latest collection. From the most opulent to the most graphic, each silhouette has been constructed using rich materials and archival prints. Intricate clean cuts and the usage of passementerie and fringes were amongst the most impactful pieces to hit the runway, besides the new line of bags, the Lanvin Nomad. Warm winter hues and an assortment of furs, feathers and leather sums the feeling of luxurious sophistication of Lanvin’s signature.

With a focus to redefine fashion, Elbaz won’t be leaving Dubai until his made his stylish mark that will no doubt impact us all. Stay tuned for more updates on his visit…. #EWLanvin

For more information about the incredibly inspiring Palais Galliera exhibition that pays homage to Jeanne Lanvin, visit here.  This exhibition, which is the first devoted to the designer runs until August 23.