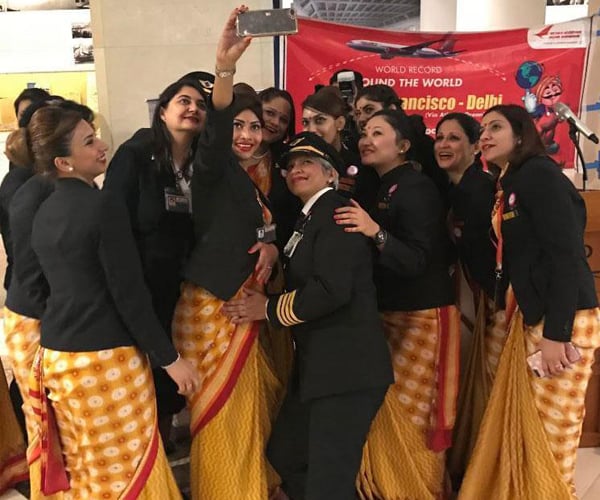 The airline claims to have broken a world record with this flight staffed entirely by women.

An Indian airline says it’s soaring ahead for female empowerment with its latest flight.

Air India claims to have completed the first ever around-the-world flight with an all-female crew, and has applied to the Guinness Book of World Records for recognition.

The flight in question took off from New Delhi last Monday, reaching San Francisco after traversing the Pacific Ocean. The Boeing 777 then made the return journey over the Atlantic Ocean on Friday, completing a 15,300-kilometre round trip.

Read:
Flying Out Of Dubai Any Time Soon? Read This First…
Why The First Woman To Visit Every Country Loves This Middle Eastern Spot

The plane was piloted by a quartet of female captains, while the cabin crew was also female only.

The airline also claims that everyone involved in the journey, including ground staff, engineers and air-traffic controllers, was a woman.

The airline described the flight as “another feather to Air India’s cap in its constant endeavour to encourage women”, according to The Independent.

The flight was made to celebrate International Women’s Day on March 8, and Air India says it’s planning further all-female flights in the future.

Read:
This Turkey-Based Female Pilot Hopes To Inspire More Women Into The Cockpit
A Saudi Prince Bought 80 Plane Tickets To Transport His Falcons In Style

“The flight is a symbol of women empowerment and it will encourage women to step out of their comfort zone and succeed in male-dominated arenas too,” Captain Kshamata Bajpayee said, according to Mail Online, which reported that 20 per cent of the airline’s staff are female.

“The entire message is actually to encourage young girls who have dreams of getting into the skies and they feel it’s too technical or this is something only men do.”

This isn’t the first female-focused initiative Air India has launched in recent times – the airline revealed earlier this year that it was introducing women-only rows on its flights.

Air India announced it would offer female passengers the option of booking a spot in the new reserved section in a bid to combat a rise in assault cases in the air.

Six economy seats per flight will be set aside for women in a bid to reassure travellers – especially those flying solo – of their safety.

The seats come at no extra cost, and travellers can also request a female-only seat during check-in, if there are some still available.