Adrenaline Junkies, This New Adventure In RAK Is One For You… 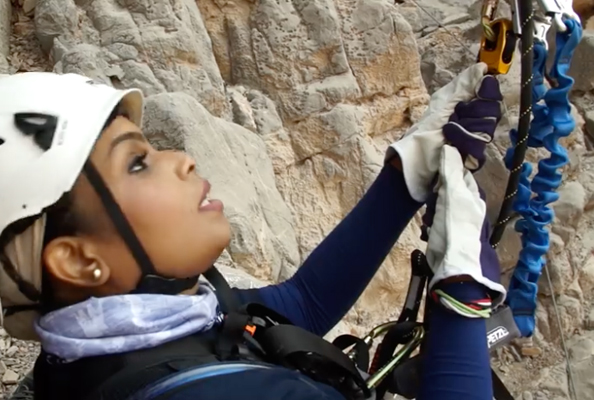 Planning a staycation any time soon? If so, this might be an activity for you…

If your favourite place for your heart to be is in your mouth, then we have some very good news for you.

The UAE’s highest mountain just got another accolade – it’s now the proud owner of the country’s largest zipline.

Yes, you’ll be able to traverse 440 metres of rockface strapped to a very solid (we promise) steel cable when Jebel Jais’ Via Ferrata opens on December 1 in Ras Al Khaimah.

Read:
Is This Abu Dhabi Gig The Ultimate New Year’s Eve Party?
Meet The Young Muslims Fighting Back Against Islamophobia In Stunning Photos
Why Hatta Is About To Become The UAE’s Hottest Staycation Spot
She’s About To Become The First Woman To Visit Every Country
RAK Is The Latest Emirate To Overhaul Its Maternity Laws

The Via Ferrata (the Italian for “iron road”) will take adventurers four hours to undertake all three routes, which vary in difficulty.

RAK’s tourism board posted a video on YouTube showing a game pair trying out the zipline, demonstrating that a little hiking and mountain scaling are needed to reach the start of the routes in the Al Hajar mountain range.

However visitors are secured at all times, with climbing aids such as iron rungs and ladders in place to help them along.

It’s “probably the closest to nature one can get”, said Ras Al Khaimah Tourism Development Authority CEO Haitham Mattar in the clip.

Here’s a video that outlines the routes and their vital statistics:

Jebel Jais, which is about 60 minutes from Dubai, will offer twice-daily ziplining tours, kicking off at 8am and 1pm (click here for tickets). The cost? Dhs400 per person – and up to seven thrillseekers can take part, accompanied by two instructors.

Good luck (we say, safe in the knowledge we definitely don’t have the courage for this one…).