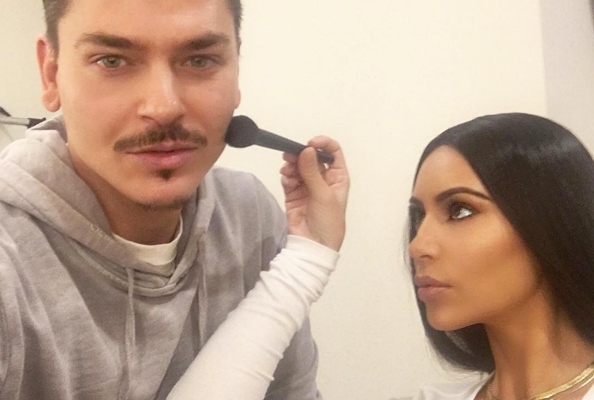 What does she use to get that glow? And what does she rely on to keep her skin looking dewy? Read on…

It was her first public appearance since her horrifying armed robbery ordeal last year – but it was a much welcome return, judging by the cheers that greeted Kim Kardashian at her makeup masterclass.

The TV star and businesswoman was in Dubai to hold a beauty workshop on Friday, along with her long-time makeup artist Mario Dedivanovic.

The sold-out event, tickets for which cost up to Dhs6,000, took place at The Music Hall, Zabeel Saray on Palm Jumeirah, where hundreds of guests were treated to a step-by-step guide to achieving Kardashian’s signature look.

Wearing jeans and a cream vest top, the star jokingly told the crowd “let’s hope that Mario does a good job” as she made her entrance.

And judging by the end result, we can all agree he most certainly did:

Didn’t manage to get a seat? Well, the beauty of living in a social media age is that you didn’t have to be there to hear some of the mum-of-two’s makeup wisdom.

Read:
Deserts, Dinners & Designer Shopping: Here’s What Kim Kardashian Is Getting Up To In Dubai
So Many Stars Wore Lebanese Designers At This Year’s Golden Globes

So from her favourite products to a general outlook on her beauty approach, here are some top titbits from the masterclass…

1. She might love makeup, but she’s all about having a great canvas to work with first. “I do what I can to keep my skin hydrated,” Kardashian told the crowd, saying she experiments with a lot of different products and drinks a lot of water.

“She’s not lazy when it comes to taking good care of herself,” confirmed Dedivanovic.

2. She loves oils to keep her skin fresh and dewy. Her favourite? Essential rose, and “there’s this one by Epicuren that’s so good, I love it,” Kardashian revealed.

3. When it comes to applying foundation and concealer on the star, Dedivanovic relies on a trust old (well not old, very new and clean, we’re sure) BeautyBlender.

4. Highlighter – a glow-giving product that the Kardashians are huge fans of – is a must-do makeup step for Kardashian, but it’s not a quick little dusting, oh no. “I always apply three or four layers of highlighter,” said Dedivanovic, who used several by Laura Mercier during the class.

5. Brows, of which Kardashian has an immaculate pair, shouldn’t be painstankingly laboured over to achieve symmetry, says Dedivanovic. “[They] should be sisters, not twins.”

6. Kardashian has passed on her love of beauty to her daughter, three-year-old North. “I own so many make-up brushes and just so much make-up, I love make-up, and now my daughter loves make-up, so she has her own set,” she told guests.

Happening right now @makeupbymario and @kimkardashian at #themasterclass in Dubai. I can’t wait til he releases his Sydney @themasterclass times and tickets.

7. When it comes to prepping her complexion, Kardashian revealed she uses a cleanser and moisturiser by Lancer Skincare.

8. The star likes to stay loyal to her family’s business endeavours, using an eyeshadow palette by sister Kylie Jenner’s brand during the tutorial.