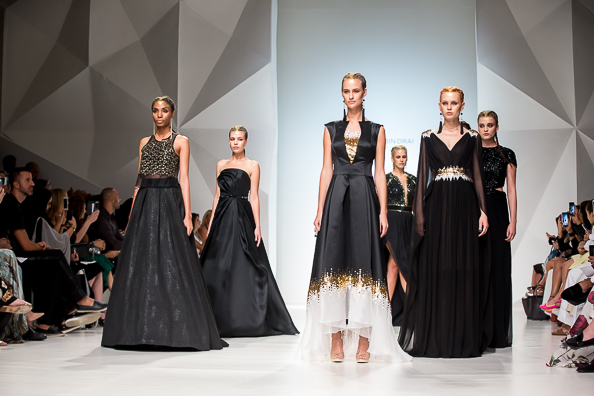 Inspiring, exciting and featuring some of the most accomplished collections and high-profile speakers that we’ve seen so far, Fashion Forward Dubai’s sixth season was an energising few days. Read on for your crib sheet of who’s-who, what happened and who wore what… 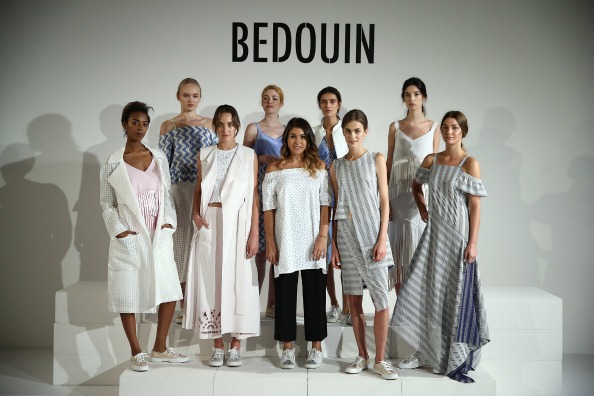 We’ve been watching local brand Bedouin Studios with increased interest for the past few seasons now, lapping up British designer and Central Saint Martins graduate Andraya Farrag’s easy-to-wear, youthful pieces. This season, however, her collection hit the nail on the head more than ever before – perhaps bolstered by a new-found confidence having also presented at London Fashion Week. The culottes, cutout leather bomber and longline belted coat have our name written all over them. 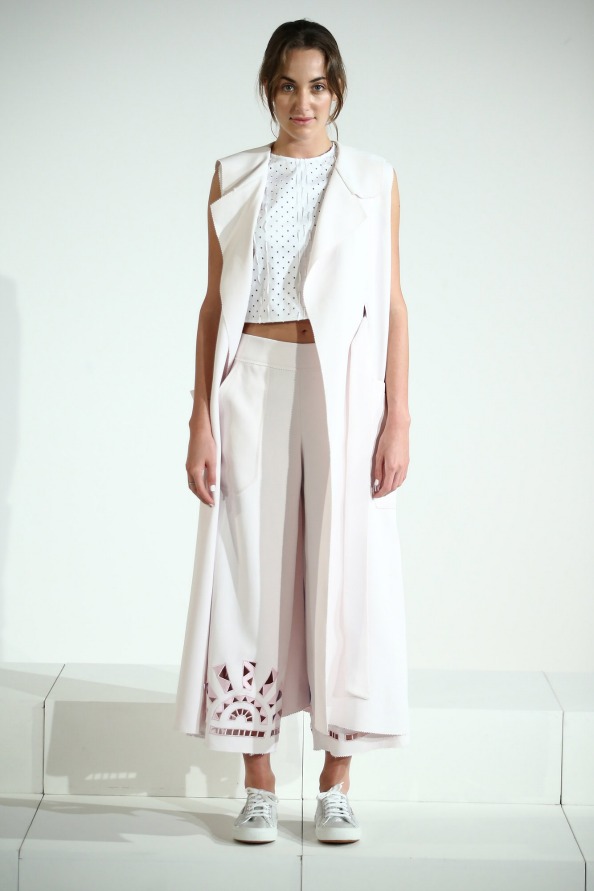 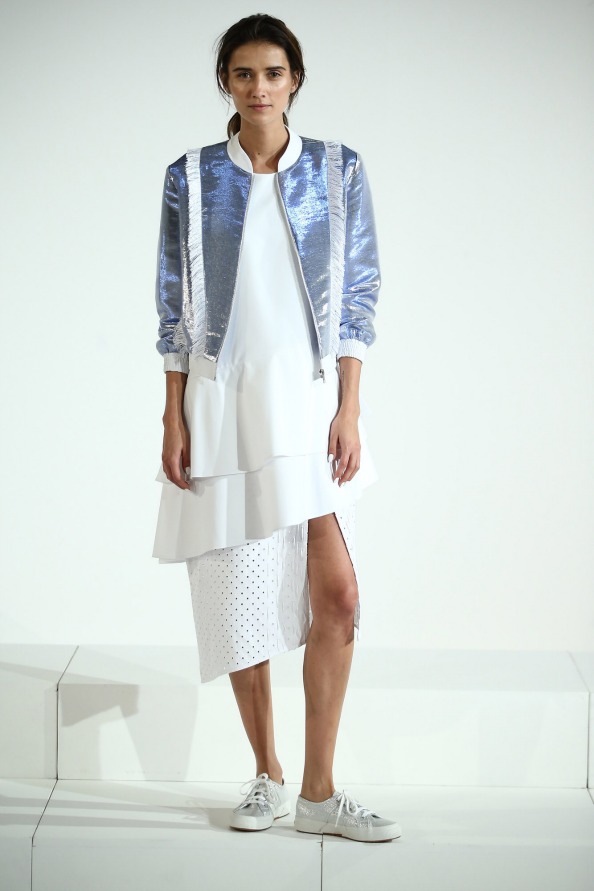 2. Imran Amed said what we were all thinking 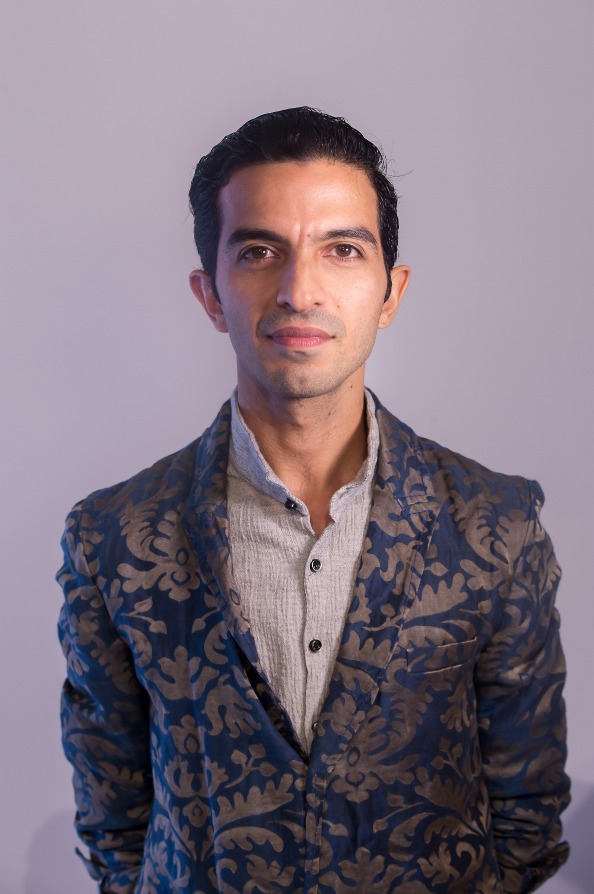 Imran Amed of The Business of Fashion

When we heard Founder and Editor of The Business of Fashion, Imran Amed was due to talk at Fashion Forward this season, we couldn’t wait to hear his famously objective, analytical brain in action. Our primary interest? What on earth he would make of our sandy city’s location on the fashion industry map. Moderator Susan Sabet asked if Imran thought our region deserved more recognition based on our considerable buying power. A few audience members applauded the sentiment. Imran’s perfectly-pitched response? In a few words, that money can’t buy you credibility. We have to work on that ourselves. Needless to say, the applause after that was louder.

3. We saw the accessory designers we (still) can’t get enough of 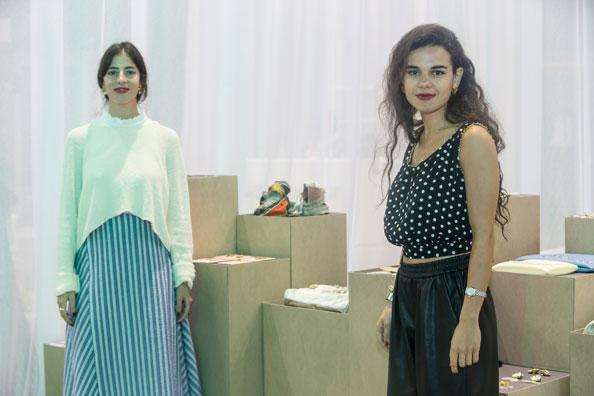 You may already be familiar with design duo Tatiana and Joanne, the co-creators of Vanina. The Beirut-born besties have have created a unique collection of jewels, bags and ready-to-wear embracing up-cycling (think metal-coated re-used paper necklaces) and 3D printing techniques. 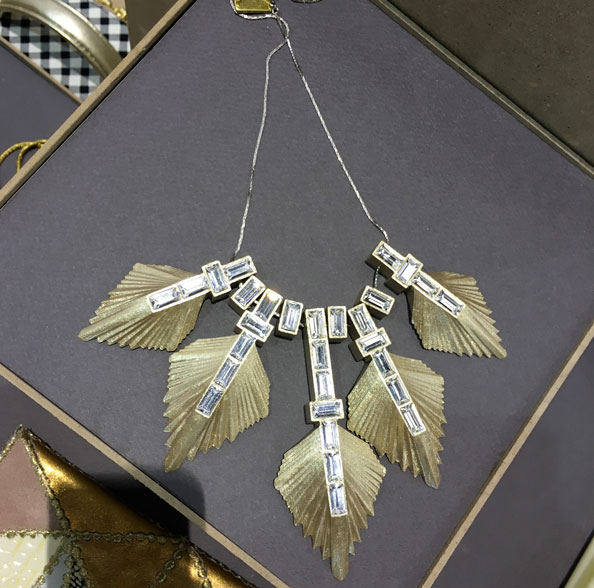 This necklace is light as a feather as it’s made with recycled paper, not including the dazzling Swarovski jewels of course

Nathalie Trad, former Emirates Woman of the Year Awards winner, captures our hearts every season with her beautiful wearable art. Her clutches look equally as good worn as they do sat on a shelf. 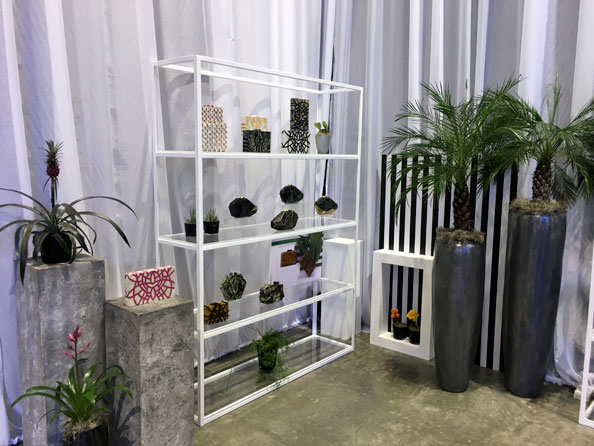 YOLO! You only live once, so adorn yourself with Madiso‘s hand-crafted costume jewellery made with exotic materials such watersnake skin and semi-precious stones. More is more when it comes to Pakistan-born Madiha’s all-sparkling collection. 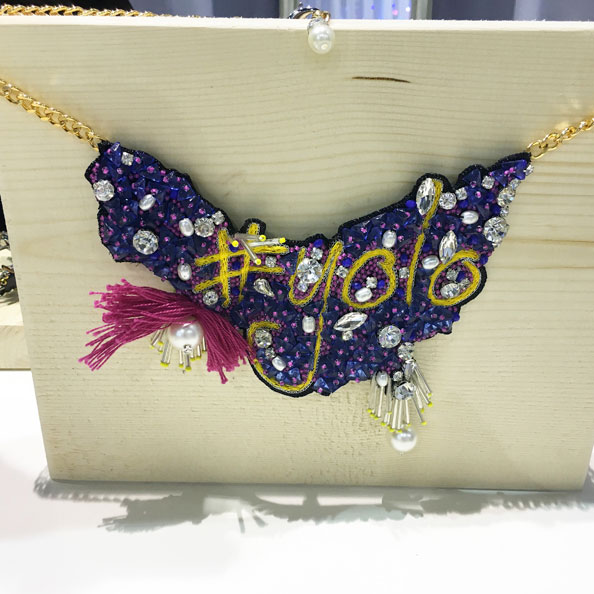 Each year homegrown talent, Rula Galayini‘s collection of bags gets better and better. This season we are quite taken with the Judd bucket bag. 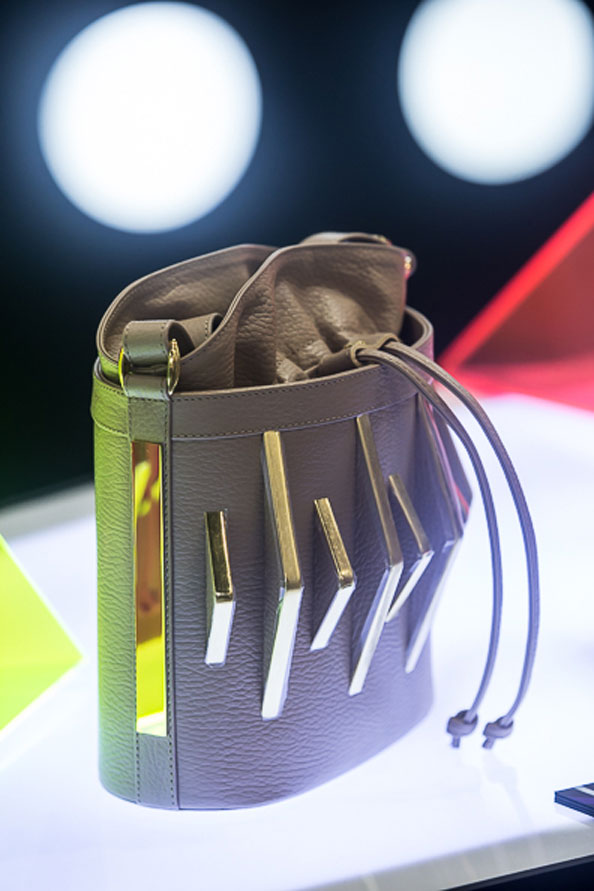 Another former Emirates Woman of the Year nominee and currently one of the UAE’s most inspiring entrepreneurs, philanthropists and designers, we couldn’t wait to see what wonder-woman, Jelena Bin Drai had up her sequinned sleeve this season. Crowds queued, the FROW filled up, as did Hall 3 without a spare seat in the house.

The first exit had to be our favourite, all sequins, tassels and drama, setting the scene for a collection of dresses which were a dreamy take on the winter desert. Other highlights included the palazzo pants and cape, an ensemble that was Dynasty meets Dubai, and the glittery finale gown which was 80s glam made wearable. We know what frocks we’ll be wearing this festive season. Call +971 (056) 1130397 for appointments. 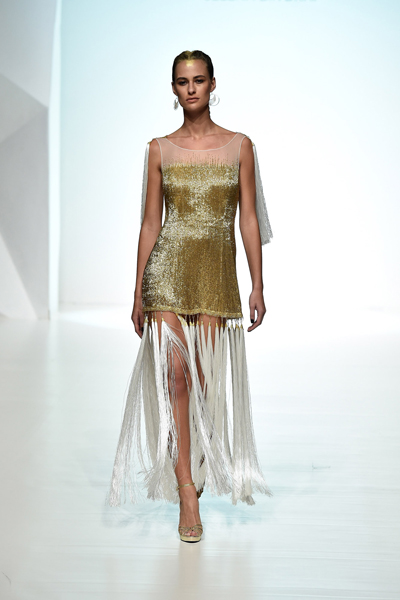 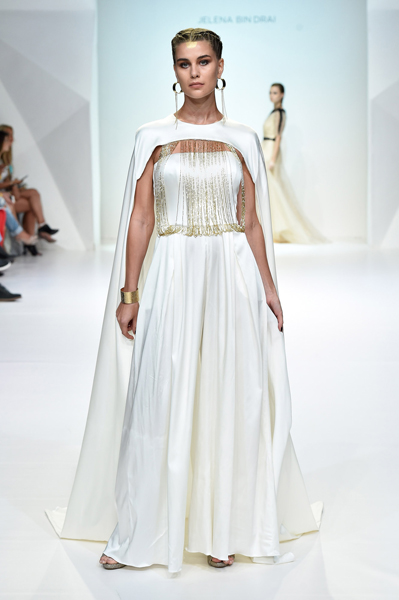 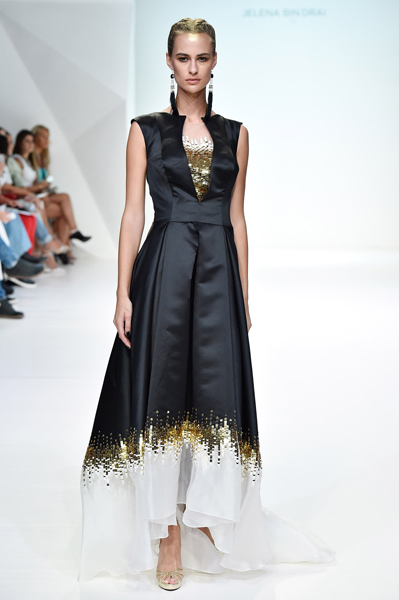 EW goes behind the scenes with Jelena Bin Drai

5. We wanted to be a Zena Presley Power Princess

Syrian designer Zena Presley sent out another collection of artistic prints for S/S16. Key pieces that caught our attention were a bandage, off-the-shoulder top, high-waisted, wide-leg trousers and an asymmetric, fitted dress with a sweetheart neckline. With the degrees dropping by the day in Dubai, we want in on these pieces now… 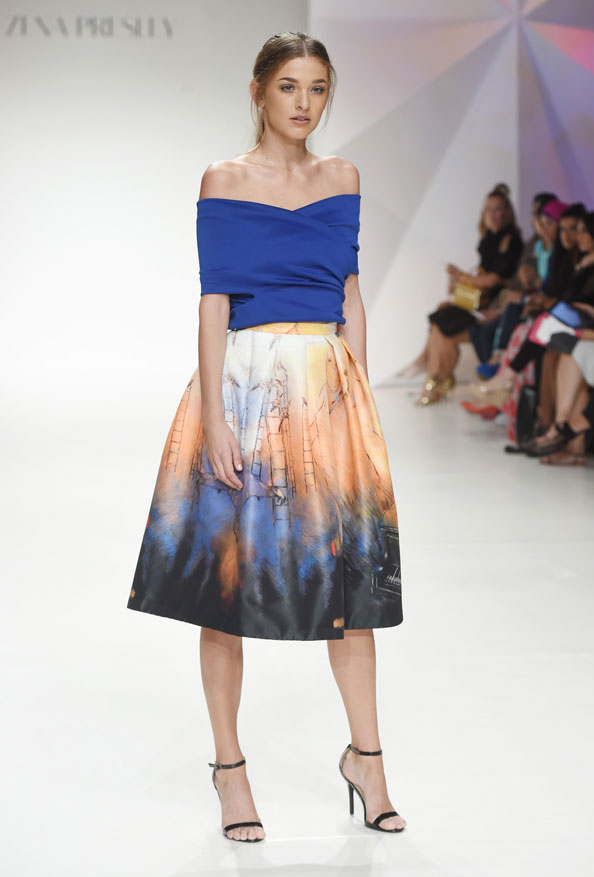 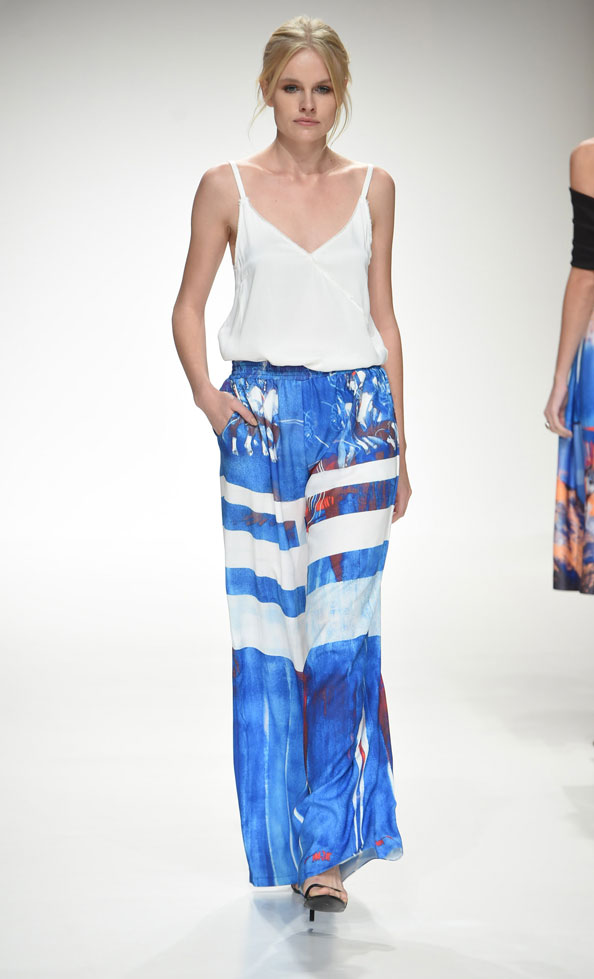 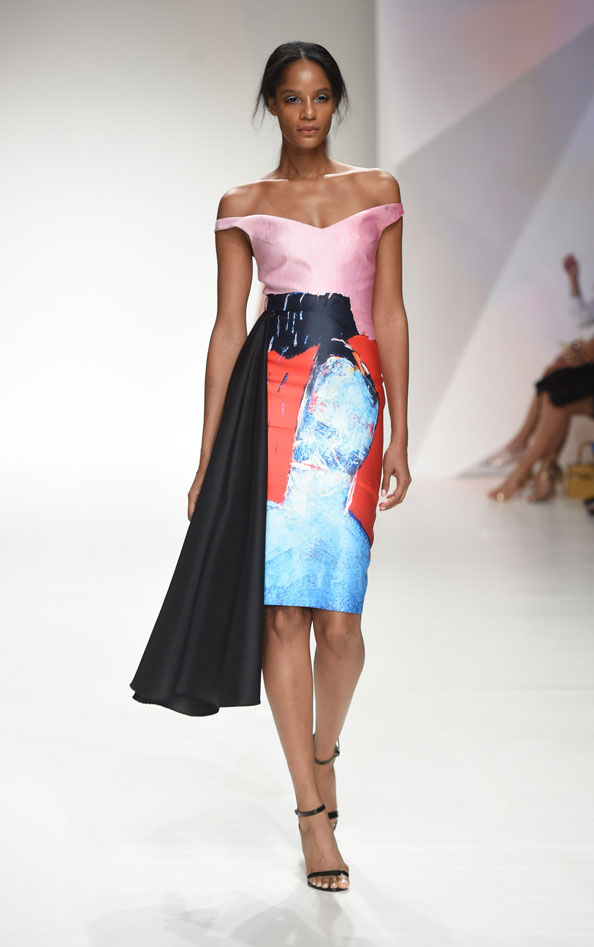 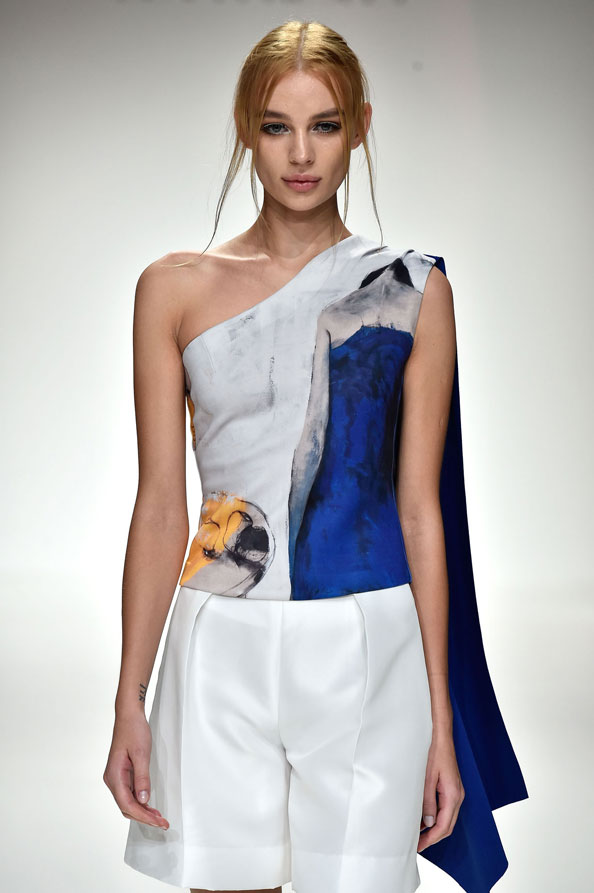 6. Taller Marmo’s striped trousers were the most-Instagrammed piece of the season 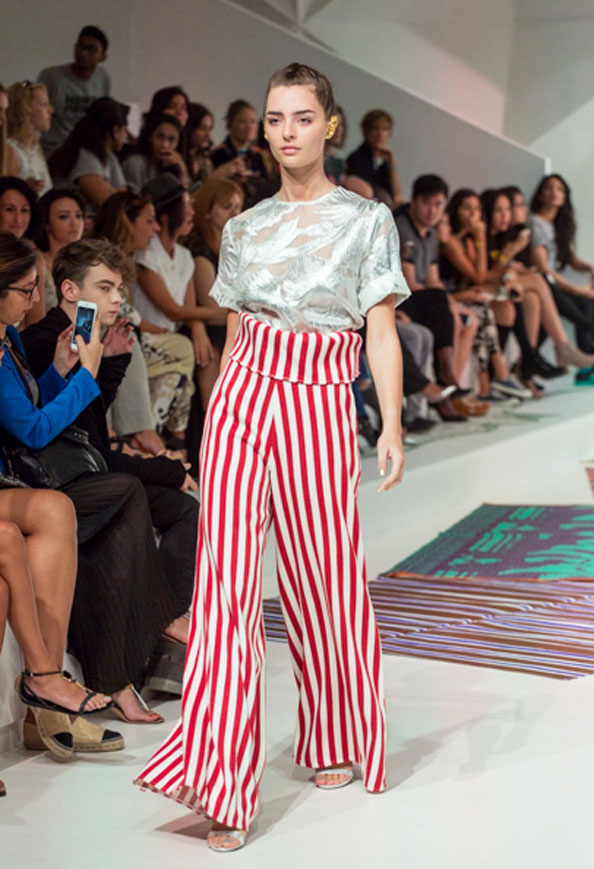 Taller Marmo’s high-waisted, striped palazzo pants had us dreaming of running away to join the circus. Failing that, they also had us reaching for our iPhone and snapping away joyfully. Most FROWers had the same idea. Instagram gold – a designer’s dream. Well done, boys! The design duo behind the brand, Riccardo Audisio and Yago Goicoechea brought us a theatrical show for their S/S16 collection, made up of bold stripes and silver lurex, inspired by an adventurous woman and the city of Casablanca. 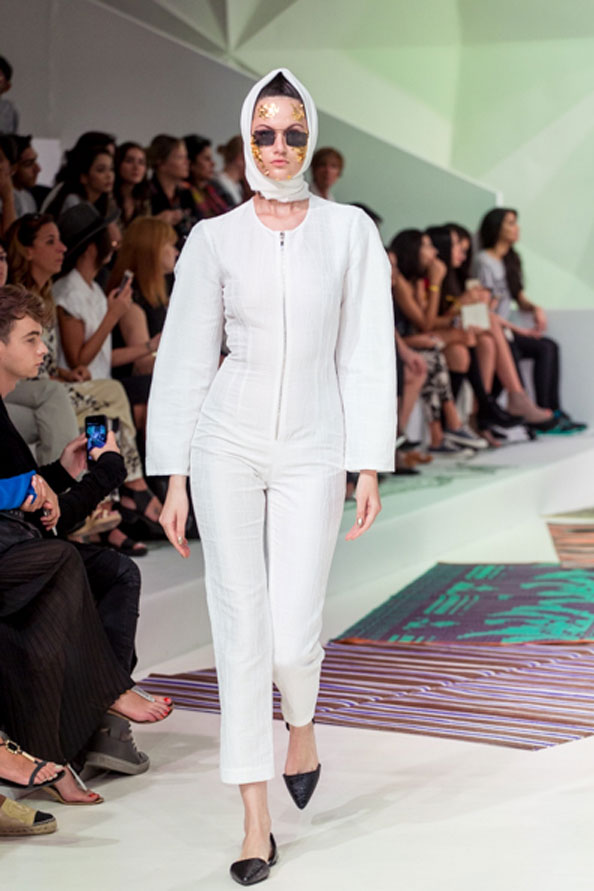 The other half of the collection had a more laidback feel, with sleek dresses and textured kaftans in dark hues, taking inspiration from the traditional, simple life of the Marsh Arabs in Iraq and women from the Hadhramaut region. A contrasting collection, celebrating two different sides of the Middle East.

7. Scott Schuman charmed us all 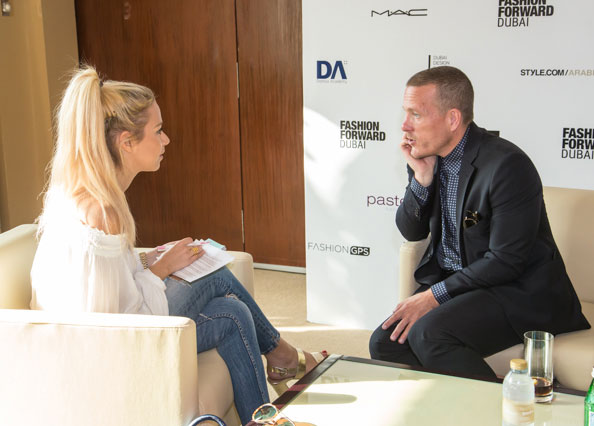 Speaking to Emirates Woman ahead of his talk on the Saturday, the legendary Scott Schuman of mega-blog The Sartorialist taught us a thing or two about shooting with an iPhone (“There’s a whole section in my new book of photos I’ve taken with my phone!”), how to take a good selfie (“Let’s up the exposure to make our skin look good…”) and that he’s not as mean as people say he looks (“It’s because I can’t see that well… it’s just me squinting!”). Read our full interview with Scott here.