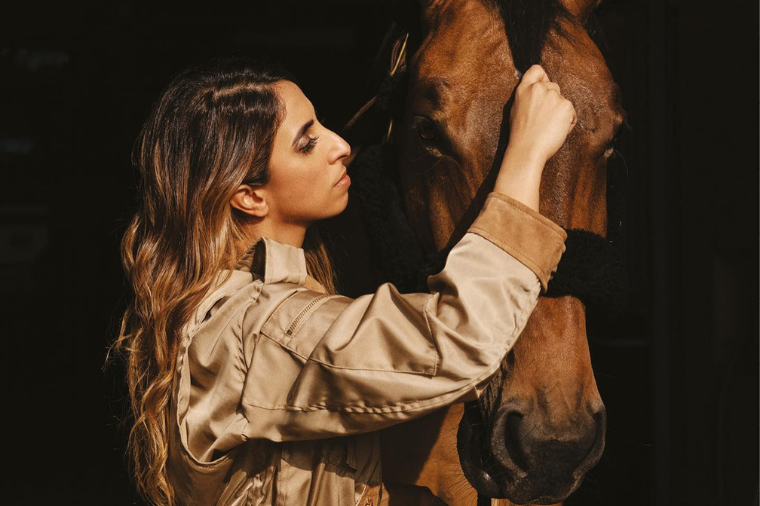 It’s no secret the UAE royals have an affinity for horses and Her Highness Sheikha Latifah Al Maktoum is no exemption.

As the niece of Sheikh Mohammed bin Rashid Al Maktoum, Vice President and Prime Minister of the United Arab Emirates and Ruler of Dubai, Sheikha Latifah has been raised with a passion for horses. So much so, that she has carved herself a successful career in the equestrian space.

From showjumping to polo, this royal has spearheaded sports for women in the UAE. As a three-time UAE national champion and Olympic-level show jumper, sports has always been at the forefront of her career.

To champion all her sporting equestrian moments, Emirates Woman has curated a list of all her most inspiring moments surrounding horses.

For September’s – The Power Issue, Sheikha Latifah shared what it takes to keep her mind in champion mode. Shot at the Sharjah Equestrian & Racing Club, our cover star is seen in her truest form as she’s captured focusing on a passion, that she’s most proud of.

Sharing a touching story with her horse Fattaan

Sheikha Latifah shared a heartfelt post expressing how she felt towards her five-year-old horse Fattaan. She touched upon details of how he’s improved over time despite not completing a show that season. In the caption of the post, she said, “Give the horses the time they need and they will tell you when they are ready.” Her empathy and connection with horses can clearly be depicted through the post.

Tasting success at the nation’s cup

With hours of rigorous training and persistence, this royal rider participated in a showjumping event in February 2019 at the UAE Equestrian and Racing Federation. As a true leader, she shared a post thanking the entire team for their support and commitment to making this event a success including the Saudi Arabian Olympic showjumper, Ramzy Al Duhami, who was also her trainer.

Making history at the Beijing Olympics 2008

Making history for women in the region, Sheikha Latifah took sports representation to new heights in 2008 when she became the first woman to represent the United Arab Emirates at the Olympics. With it being the highlight of her career at only 22 years old, she trained hard to make a mark in the competition. Having started showjumping at a high level only one year prior to the competition, she surely made the UAE proud.

With an upward career trajectory since then, this royal has proved that no challenge is hard enough for her. In 2006, she made it to the international stage at the Asian Games with participants from all around the globe. Held in Qatar, she participated as a member of the UAE team, taking her passion for endurance racing to a global level. Without any expectations, she brought back the bronze medal, and return to the UAE with a token of her hard work. Without limiting herself to just one Asian Games event, she made it to four later on.

Her first taste of success

Back in 2003, Sheikh Latifah got her first taste of triumph at the UAE Showjumping Championship when she was only 18 years old on a national level.