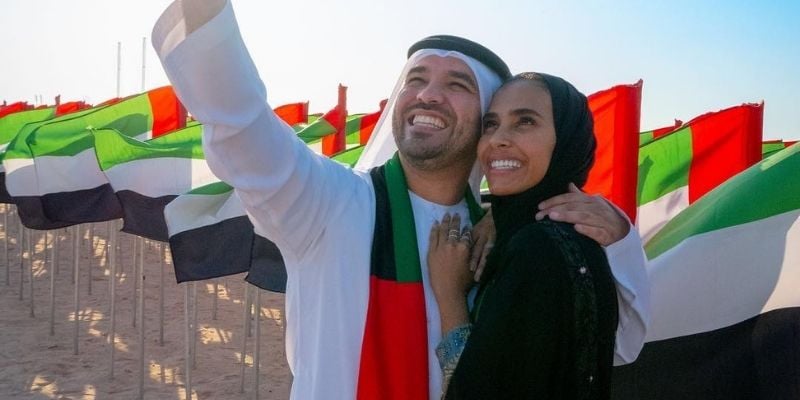 Having cultivated an impressive online following for himself over the years, Khalid has shared many important messages with his audience.

Some of his most popular videos are about growing up in a multicultural household, his mother is from the UK and his father is Emirati, his son’s autism, sharing an insight into how the UAE handled the COVID-19 pandemic and the story of his wife, Salama Mohamed’s skin condition vitiligo.

Delving behind the lens of the camera, here’s a few facts you may not know about this hugely popular content creator.

He completed his MBA at Stanford University

After having graduated from high school at the American International School in Abu Dhabi, Khalid, later on went to complete his MBA at Stanford University in Business Administration. However, he discovered his passions lay elsewhere in storytelling. Doing a complete 180 from his MBA, Khalid moved into the journalism field and eventually landed a role as CNN’s Middle Eastern Correspondent.

He’s known for his selfless acts

From volunteering in schools around the world as part of Dubai Cares’ imitative to performing good deeds around the country. Khalid is known for spreading positivity and awareness through his selfless acts, including earlier last year when he took a video on YouTube explaining the concept of a Balikbayan box, where several household items are sent back home on behalf of residents of the Philippines. He also gave his housekeeper, Leila, a surprise with the box and a ticket to visit her family.

His goal through content creation is to bring people together

From laying emphasis on co-existing without conflict to sharing experiences that encourage one another, Khalid is always spreading love and awareness about serious issues. By also running a Facebook group entitled ‘Khalid’s World Group’, participating members are encouraged to share their experiences and see how they can help each other accordingly.

He has a Scottish mother

Having grown up in a multicultural household, Khalid is half Emirati, half Scottish. However, having grown up in the UAE, holding a UAE passport and having worked for UAE Government entities, he sees himself as “100 per cent Emirati”.

In a column for The National, he said, “My mother is British and I love her – however, I am 100 percent Emirati. It is all I have ever known; it’s the country I love and work for every day. So how different am I? I don’t think I’m that different at all.”

Having garnered a massive fan base from making lighthearted and humorous videos with his wife Salama, the couple reached new heights (quite literally) at the beginning of this year. In January of this year, Khalid announced the exciting news that he and Salama had “TikTok’d [their] way to the Burj Khalifa” to his 1.2 million followers.

“Can’t believe it,” he said of the opportunity. “Thank you [TikTok Arab creators] for the incredible opportunity and all of the support you have given our work, we are so excited for the year ahead and all the stories we are going to tell together.”