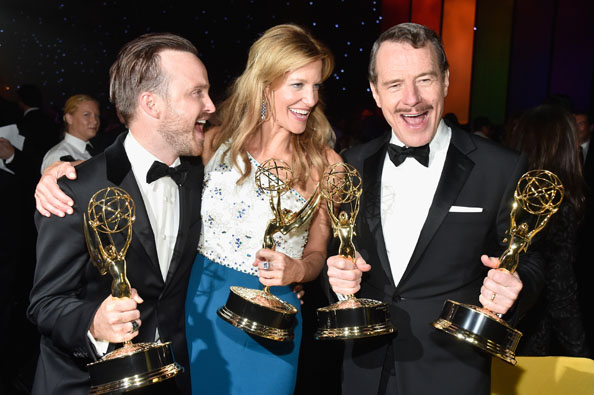 Following hot on the heels of Sunday’s MTV VMA Awards, the 66th Emmy Awards took place last night in Downtown Los Angeles. While the ceremony was deservedly dominated by the nail-biting drama Breaking Bad, there were some other highly memorable moments to take the spotlight…

These days the awards don’t even start at the red carpet –supermodel and television host, Heidi Klum, documented her pre-awards prep moments on Twitter, from digging through a mountain of bling with celebrity jeweller Loraine Schwartz to getting powder perfect with her bestie, fashion designer Zac Posen. 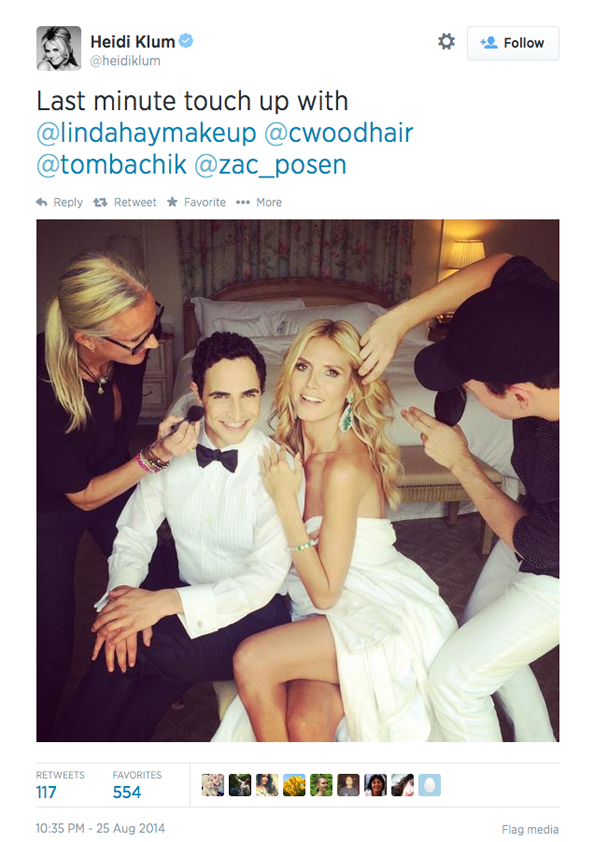 E! Entertainment ruled the red carpet roost as usual, but managed to surprise audiences with the innovative ‘clutch-cam’ – a dedicated camera to giving you the close up on all the red carpet accessories. This new gimmick joins the quirky, fingers-first ‘mani-cam’ in providing spy-worthy celebrity surveillance.

Late night television host, Seth Meyers, hosted the awards but was completely out laughed by Jimmy Kimmel who ‘roasted’ Matthew McConaughey by asking what the “movie-star-face” Oscar-winner was even doing at a television awards ceremony. He then asked the camera to pan to Ricky Gervais to show a “television face” actor. Gervais, being a good sport, pulled a slightly frightening, but amusing expression.

Gervais unfortunately did not win anything this year, but four of his fellow Brits did, including Benedict Cumberbatch and Martin Freeman for Sherlock. This impressive win from the Brits at the American awards show is quite ironic as the Americans controversially took home a bag full of awards at the 2014 BAFTAs.

As Julia Louis-Dreyfus went up to collect her award for Outstanding Lead Actress Comedy Series, Bryan Cranston of Breaking Bad ambushed her and gave her a passionate kiss. Some die-hard Seinfeld fans might remember that Julia’s character Eilane dated a dentist called Tim Whatley who was played by Cranston way back in the nineties. But earlier this month the two reunited to film this hilarious Emmy’s promo where Louis-Dreyfus tries to sell her Emmy award to Cranston and Aaron Paul, who run a seedy shop called ‘Barely Legal Pawn.’

Touching tributes to late actors Paul Walker, Philip Seymour Hoffman and Robin Williams tugged at the heart-strings but it was Billy Crystal’s tribute to Williams that was truly moving. He said, “For almost 40 years he was the brightest star in the comedy galaxy, but while some of the brightest of our celestial bodies are actually extinct now, their energy long since cooled, miraculously, because they float in the heavens so far away from us now, their beautiful light will continue to shine on us forever. And the glow will be so bright, it will warm your heart and make your eyes glisten, and you’ll think to yourselves, Robin Williams, what a concept.”

And last, but not least Modern Family’s Sofia Vergara stood on a 360-degree rotating platform and managed to spark a feminist debate on social media. Many women took to Twitter to complain that Vergara was being treated as a ‘prop’ – objectified by a male-dominated Hollywood and perpetuating female stereotypes, with one commentator saying, “‘Work hard,’ I whisper to my daughters. ‘And one day you too could be honored for your talent by being rotated on a platform on live TV.’“ 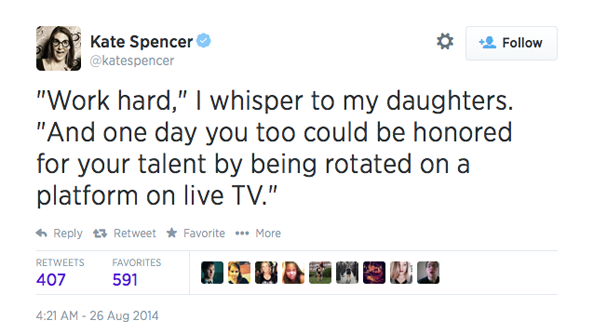 We can’t wait to see what happens next time!