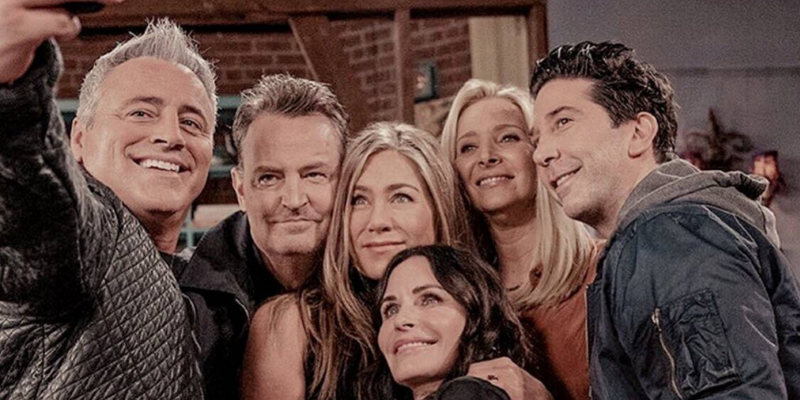 It’s hard to believe it’s been 17 years since the last episode of Friends aired as it’s still a beloved show amongst many generations around the globe.

The cast recently reunited for the first time since the show’s end in 2004 for Friends: The Reunion and, of course, it’s meant all eyes have been on the famous six-some – Courteney Cox, Jennifer Aniston, Lisa Kudrow, Matt LeBlanc, Matthew Perry and David Schwimmer – once again.

Coinciding with the reunion, a tabloid magazine’s prediction from 2004 on what the Friends cast would look like in 20 years time has re-emerged and it’s safe to say it was totally and utterly wrong.

While we may not have quite reached 2024 just yet, it’s safe to say Star magazine’s predictions and use of photoshop was 100 per cent off.

Have a look for yourself below. Let’s break down the magazine’s predictions.

Firstly we have Schwimmer who plays Ross Geller on the hit show. According to Star, he “may go grey by age 57, but he won’t lose any of his boyish charm”. We agree with the latter, but at age 54 he’s still sporting black locks and the CGI photo is way off.

Then we have Aniston who, according to Star, would be “puffier” in her 50s. We’re not entirely sure what that means, but it’s a hard no and, again, the photo is totally wrong.

For LeBlanc, the actor would “remain every bit a ladies’ man” in his 50s which is an accurate claim to make, but the photo is not.

Similarly, the predictions for Cox, Perry and Kudrow are totally off.

In the words of Chandler Bing, “Could they be any more wrong?!”