17 of the most iconic Met Gala outfits of all time

The night of nights in fashion is making a highly anticipated return on Monday, May 2, 2022, with the theme of ‘Gilded Glamour, White-Tie’.

As we prepare to witness another display of awe-inspiring looks at the Metropolitan Museum of Art, Costume Institute in New York City, Emirates Woman takes a journey through the archives to see some of the most covetable Met Gala looks showcased to date. Wearing a thigh-high Prada dress with leather gloves, Gigi Hadid’s look in 2021 was styled with a high ponytail for a sophisticated finish. Her dramatic voluminous red hair also made its debut at the event. Gigi also wore a statement necklace designed by Jacob & Co. – a unique piece with a total weight of 140 carats and a central stone of 92 carats for the theme ‘In America: A Lexicon of Fashion’.

The supermodel glowed in a rather flamboyant Dolce & Gabbana x Harris Reed look on the red carpet, accompanied by a dramatic headpiece and paired with a gilded feather cage overskirt, for a look to remember for years to come. Inspired by America’s golden age, she most certainly made a statement.

The model’s Hollywood-inspired look emulated an ethereal feel on the carpet. Seen in a sheer embellished Givenchy gown, the look was inspired by Audrey Hepburn’s dress in My Fair Lady.

The supermodel embraced the power of simplicity at last year’s Met Gala. She opted for an all-black evening attire created by Saint Laurent, inspired by Grace Kelly’s world. For her first Met Gala, Billie Eilish was elegantly adorned in a gorgeous Oscar De La Renta gown, completely fur-free to match her ideals. Designed especially for her, she’s another star who’s on the journey of being a catalyst for change.

The popular Argentinian model was seen in a gorgeous pink silhouette from Elie Saab. She complimented the look with matching gloves, silver bangles and a fishnet headpiece for that Met Gala touch and to adhere to the theme ‘Camp: Notes on Fashion’. 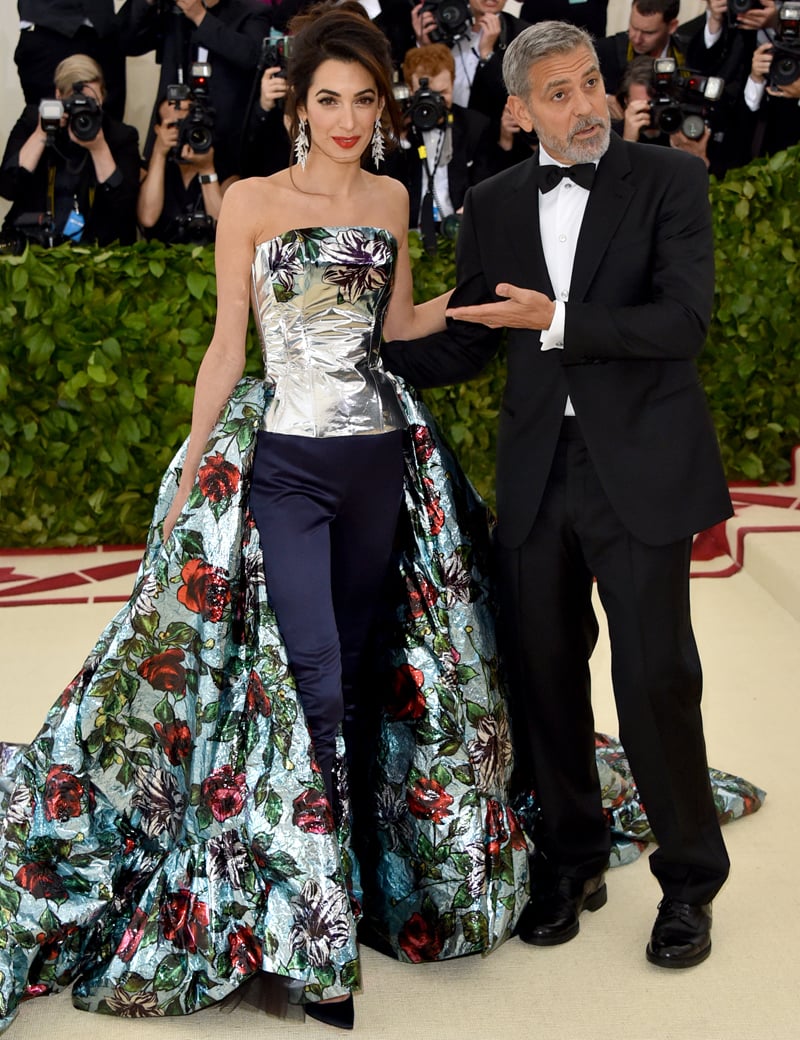 The theme of the Met Gala for 2018  was ‘Heavenly Bodies: Fashion and the Catholic Imagination’ and the human rights lawyer put her own spin on the concept in a contemporary two-piece ensemble. She was donned in streamlined navy trousers and a metallic corset by emerging British designer Richard Quinn, as she graced the red carpet with an edge.

With a neck-cradling silhouette and artful draping, Dutch-Moroccan model Iman Hamman made a statement in 2018. Her gown was regal and jam-packed with drama, it’s no surprise that US designer Zac Posen called the star “the most stunning woman of the night”. 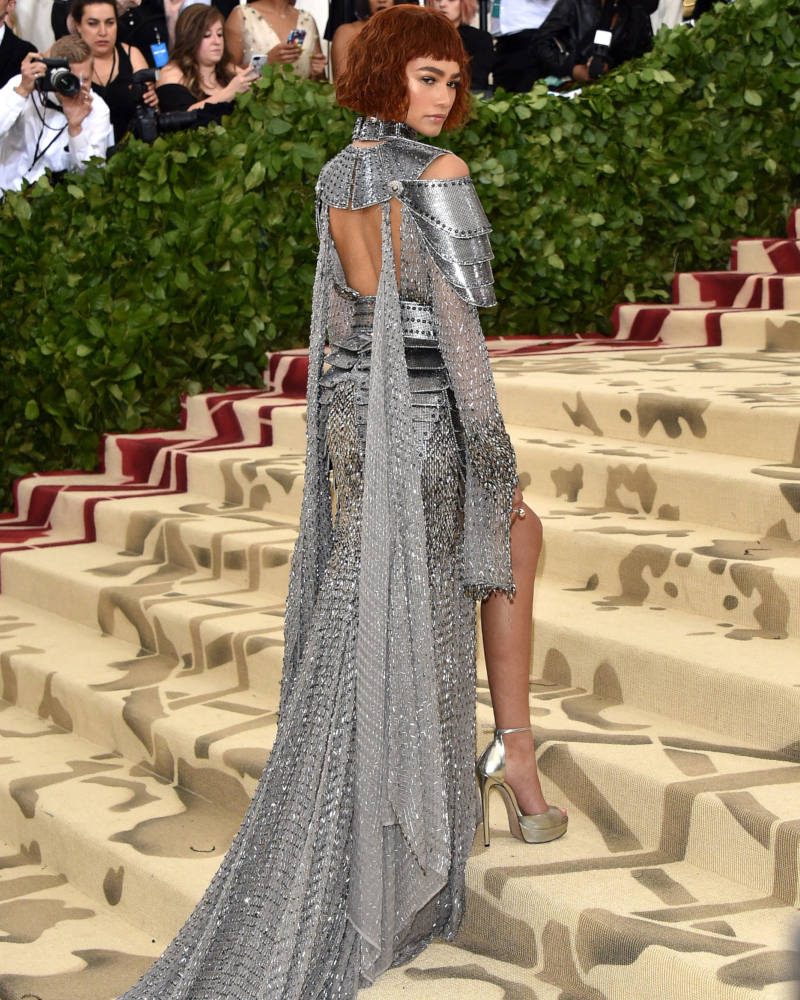 To depict the theme in 2018, Zendaya was seen in a Joan of Arc custom Versace piece, most definitely stealing the limelight on the red carpet. Designed to resemble an armour, her look was paired with platform heels and jewellery from Tiffany & Co. 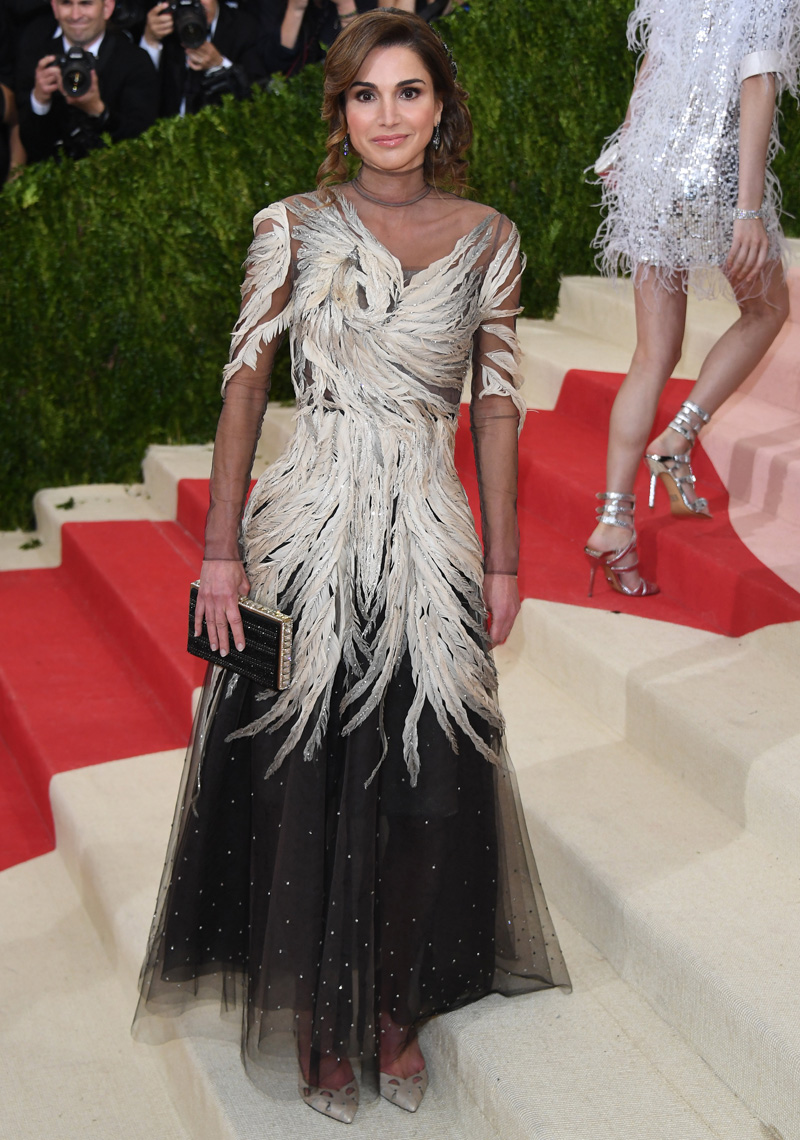 Queen Rania stunned at the Met Gala in 2016 which followed the theme of ‘Manus x Machina: Fashion in an Age of Technology’. She wore Valentino and looked beyond ethereal. The tulle gown was embellished with intricate swam-like feathers and a cascading set of crystals for a refined look.

In 2016, Kylie Jenner hit the red carpet in a Balmain gown to complement the tech white tie dress code. The beauty mogul wore the silver embellished gown with a sleek bob and simple strappy heels. 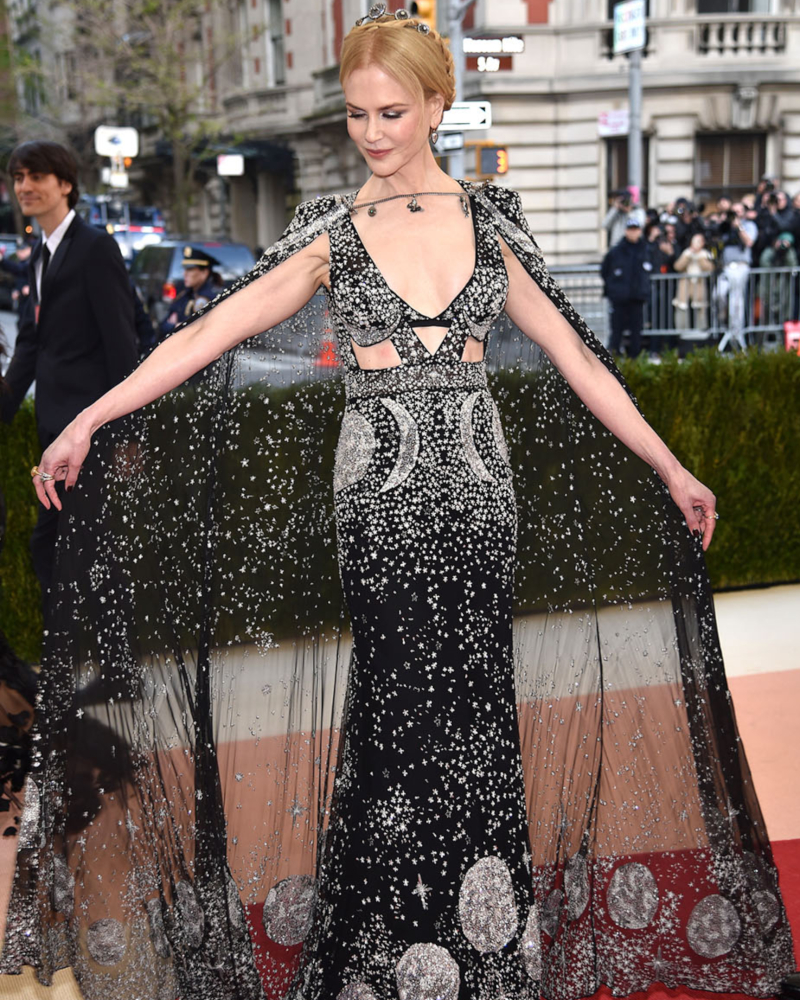 Dressed in Alexander McQueen, Nicole Kidman stood out in a constellation-fused gown with cape-like wings.

A post shared by The Metropolitan Museum of Art (@metmuseum)

Seen in Guo Pei, Rihanna was seen in one of the most talked-about gowns to date in 2015. The Fenty Beauty founder went for a bold yellow look, wearing a 55lb yellow masterpiece with a flowing trail, for 2015’s exhibition, ‘China: Through the Looking Glass.’

Queen B most certainly rocked the red carpet in a sheer black Givenchy dress with a birdcage headpiece and burgundy lipstick for that vintage noir-inspired look. The theme was ‘Charles James: Beyond Fashion’, which Beyonce effortlessly portrayed. 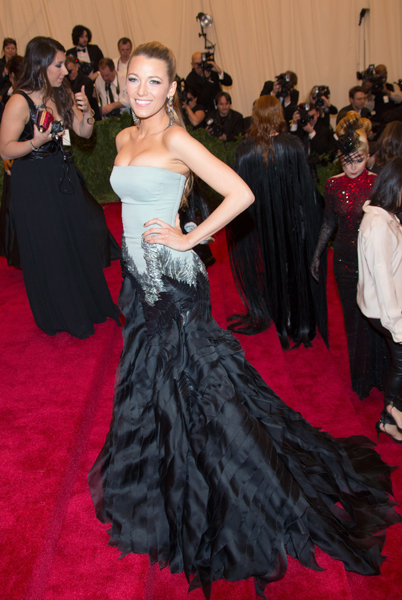 For the theme ‘Punk: Chaos to Couture’, Lively is seen in a structured Gucci Première, that was complemented with smokey eye makeup for a dramatic look. 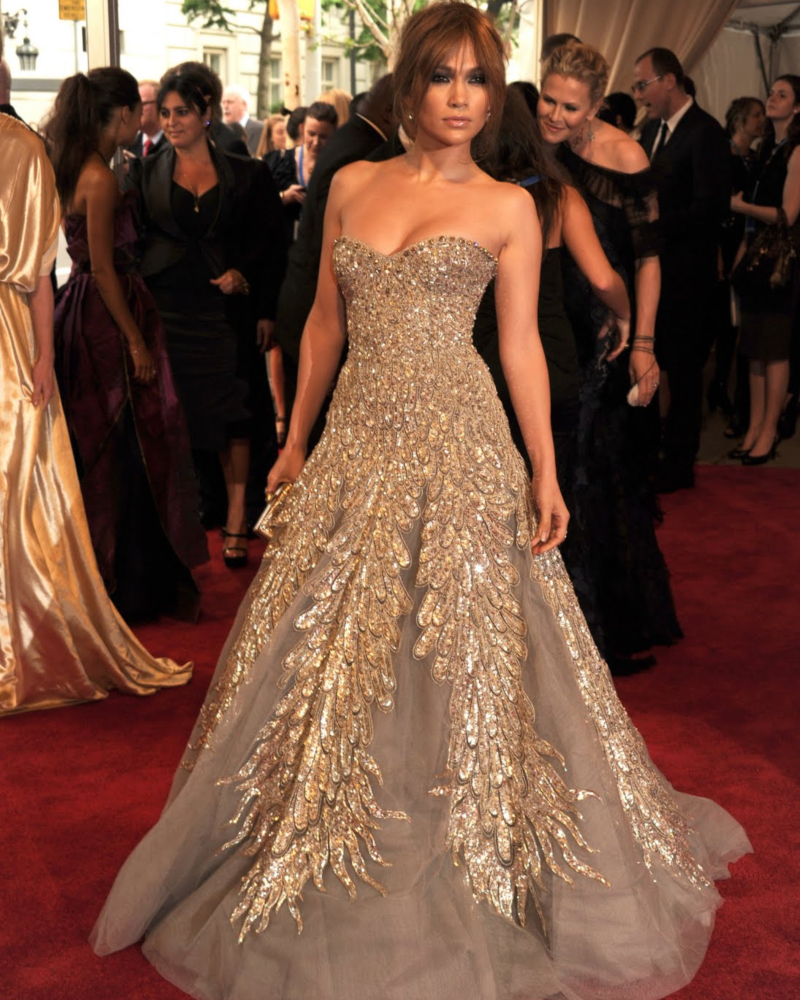 Seen in a gorgeous Zuhair Murad gown in 2010, Jennifer Lopez absolutely stunned on the red carpet. To amp the look, she opted for a smokey eye to complement this a-line tulle gown. Her look stood out in honour of the theme, ‘American Woman: Fashioning a National Identity’. 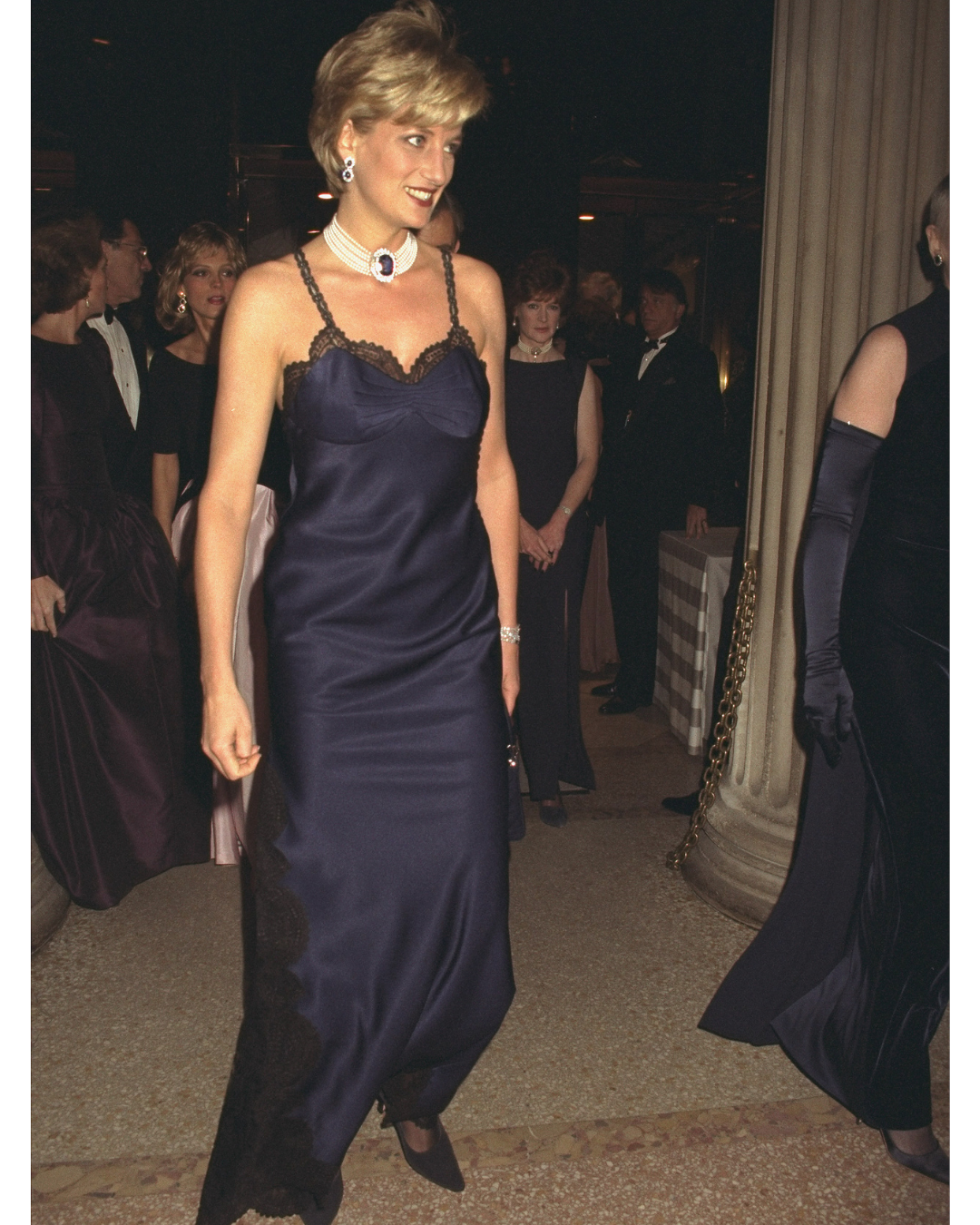 In all her elegance, Princess Diana was seen in a lingerie-inspired silhouette that’s still trending to date. For the theme ‘Christian Dior’, the royal established herself as a fashion icon with a look that’s beyond timeless. She works a stunning statement pearl choker necklace and a Lady Dior bag, making it one of the most memorable looks of all time.